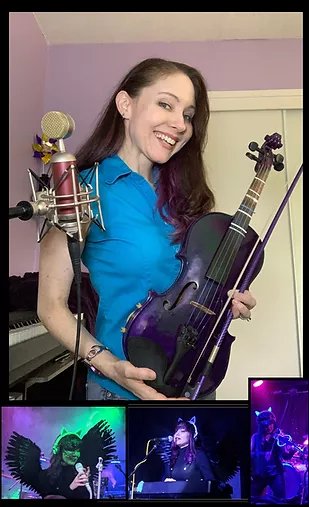 Liz has been teaching violin lessons since 2009

Styles
Traditional/Classical violin with an occasional contemporary twist to the lesson.

Teaching Method
Liz teaches basic traditional/classical violin techniques to students.  She uses a combination of the ‘Essential Elements for Strings book series and her own created lesson plans.  Liz likes to ensure an excellent foundation is set with good posture, accurate bow hold, precise intonation, solid timing, and the ability to sight read.

Other
Liz began playing with orchestra’s her 4th grade year of schooling and continued all the way through high school.  She also auditioned for and made the honor orchestra in middle school as was awarded 1st chair for one of the seasons.  In addition to her orchestra performances, she also has done a variety of solo performances and both solo and duet state competitions in Colorado.  She was awarded “most versatile musician” by Keyboard III Studios in Colorado and won 1st and 2nd place in several middle and high school state competitions.  Upon moving to California Liz had the opportunity to play for several local rock bands such as The Mythics, Tiny Monster Invasion & Illusions Echo.  She is also a wedding violinist for hire.  In addition to performing, Liz has been musical director for a production of “The Music Man” and “Evil Dead the Musical” and has written songs for film/tv/advertisements. Her most current projects are with original band, The Bitter Elegance (www.thebitterelegance.com).

Number of Lessons Per Month: 4

Contact Liz at Liz@MusicVibing.com to schedule lessons or ask questions